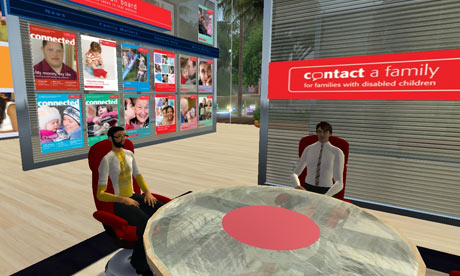 A charity that helps the parents of disabled children contact each other and access services has set up an office in the virtual world of Second Life.

The charity, Contact a Family, is using government funding to create the digital office to support its work giving parents information and mutual support.

Mark Robertson, Contact a Family's head of information, explains: "The first place anybody goes for information these days is the internet. There are issues with accessing support in real life, even popping out to a local advice centre. Online and telephone support is and has been for some time important to parents of disabled children."

Second Life, a virtual reality world where users can adopt new identities (avatars), conduct business and even raise families, may seem an odd place for the charity to reach its audience.

But Contact a Family insists it is are only going where the parents already are. As those caring for disabled children may find it hard to leave the house and get help, many seek refuge in the virtual world and in online communities.

"It's an attractive and new way of reaching parents," says Robertson.

The office started running a fortnight ago and is open online every Wednesday from 10am to 4pm. Parents, represented by their avatars, can stop in for a chat with a staff member. Alternatively, they can come by when the office is closed to browse.

"We don't have to be open to use the office. It's a bit like an online library," says Robertson.

Visitors have included one mother whose son has a rare condition called dyskeratosis congentia, of which there are only 66 known cases in the world. The adviser was able to give her the contact details of a parent support group and the leading medical specialist for the condition. Other parents have dropped by wanting to meet people in the same situation.

"There's been small numbers, but it's really early," says Robertson. "If it's successful it will take time." If enough people do drop by, real world meetups may be on the cards.

Contact a Family also runs support groups on social sites Facebook, MySpace and Bebo, as well as its own network, makingcontact.org. It has also set up its own YouTube channel.

The charity's online support project was created with funding from the Department of Children, Schools and Families' parent know how initiative, a programme intended to develop new channels to reach parents who are not as well served by traditional sources of support.

The outpouring of sympathy for a man acquitted of murdering his brain-damaged daughter has highlighted New Zealand attitudes to disability and exposed a significant contradiction.

Once again we have seen how society is able to justify the killing of person if they are part of the big other, or in other words, they are placed in a category of people who are not like us. This is discrimination of the most blatant and institutionalised kind, and illustrates the Human Rights Commissions findings that people with disabilities are the most marginalized and vulnerable members of society.

The attitudes which sanction the death of a disabled baby reflect a deeply entrenched prejudice. I have been teaching disability rights and awareness since 1970s and it shocks me to encounter  every day - the same attitudes that prevailed more than 30 years ago.

Mainstream society is still quite willing to disassociate itself from people who are different and, in the case of disability, we can convince ourselves that a person is in fact, not a living being with any worth, and murder is justified. We simply hit the delete button and convince ourselves it was the right thing to do.

Many people in the disability sector  and private citizens - have been left reeling by the Nelson case. Once again, they see that disability is in society rather than individuals. Its a value-set that passes through the generations, that we grow up with in schools and in normal families and is re-enforced daily by media messages that stress health (always wrongly associated with ability) and the usual range of physical and mental functionality.

When we allow any kind of discrimination to happen it has a long term effect. The Nelson case sets a dangerous precedent about the consequences for killing someone with a serious disability. It says very clearly that there are no consequences. The disability lobby has few legitimate places to challenge such discrimination. CCS, one of the larger lobby groups, has made a complaint to the Office of Disability Issues, but one wonders whether it really should be this new office initiating the complaint. Or it may have been better to lodge a complaint with the Human Rights Commission, but the Commission, too, is unable to take direct action. Disabled persons are left in a political quagmire  if we can work through the bureaucracy we may be able to speak up, but its more likely our outrage will never be heard.

I have a colleague who believes that, if presented with the medical information, most new parents would elect to terminate an unborn child with a disability. I dont know if she is right  and I sincerely hope she is wrong  but what I do know is that the medical sector continues to reinforce the discrimination about disability. If a parent is disappointed that their unborn child wont ever walk, write music or play rugby then so what? Children disappoint theyre parents all the time. I failed my own my father terribly by not becoming a medical doctor. Why should disability be treated any differently?

One of the problems for disabled persons is that we hear very little about our abilities. If we see a disabled person succeeding in their career, or in sport and recreation, or in their normal daily living, we tend to view it as an exception. But in reality there are thousands of people  remember that one in five New Zealanders have a disability  who are achieving their potential. I have one colleague in the United States who has risen to the position of president of a state university. He is blind and deaf and has never spoken a word in his life. Here in New Zealand I met a young man who is making his way in professional theatre. In both cases these people have been able to achieve because the barriers imposed by society have been removed. When this occurs there can be unexpected spin-offs. Just a few weeks ago I met a tour operator in Akaroa who has recognised the need to cater for people with wheelchairs or who need to carry daily medication kits. His newest coach will be adapted to suit, for a limited outlay, and then he has a whole new market to develop.

The Human Rights Act 1993 makes it illegal to discriminate against people on the basis of disability, but clearly this treatment is continuing. New Zealands Disability Strategy (NZDS), introduced in 2001, is a laudable attempt to remove barriers to participation, but it can never force a change of attitudes.

The NZDS has focused initially on the 10 biggest Government departments and required action plans to achieve a non-discriminating New Zealand society that welcomes people of all abilities. The Ministry for Disabilities has made it clear that some of those initial plans fell well short of the mark. My own interviews with key stakeholder (people with disabilities) has noticed some change in awareness of peoples rights to live, work and play in the community, but actual applications of policy have been barely noticeable. Worse, there are some glaring contradictions. Just last month the Ministry for Health and Disabilities advertised a senior position. The application form explains the agencys commitment to equality and immediately goes on to ask applicants if they have any disabilities which would prevent them from doing the job. In a number of countries this would be illegal.

New Zealands performance on disability rights suggests a stronger legislative approach may be necessary. We lack something as comprehensive as the Americans with Disabilities Act (ADA), 1990. This groundbreaking human rights legislation makes discrimination due to a disability illegal in public, private and non-profit recreation agencies in the United States. The ADA has strong implementation and compliance strategies that are enforced

In the meantime it is up to the chronically overworked disability rights group, including the New Zealands Disabled Persons Assembly, People First, Like Minds Like Mine and CCS, to deal with a huge range of discrimination  in housing, transport, access, rights and on and on.

The creation of the Office of Disability Issues is a positive step, but there has to be some concern about yet another Government agency monitoring Government performance. A better approach would be a truly independent and well resourced agency - one that can not be threatened or ignored  with paid advocates on community and national issues.

Without this kind of co-ordination and leadership, discrimination will continue.

Dr Carol Stensrud is a disability trainer, consultant and speaker and a Senior Lecturer in the Environment, Society and Design Division of Lincoln University . She has dyslexia, arthritis, chronic depression and size 12 feet, but gained her PhD well before they could be purchased on the Internet.