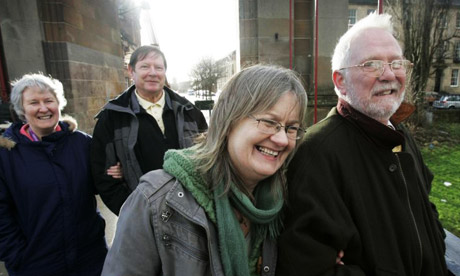 Six years ago, James McKillop asked organisers of a carers' conference in Scotland if he could attend and give a talk. When his request was refused, he posed as a photographer, gained entry and had his say anyway. McKillop laughs at his audacity now, but it kickstarted a career as an unconventional campaigner and marked him out as a new kind of advocate for people with dementia.

"They wouldn't let me go [to the conference] because I had dementia," he recalls. "That got me going. When you get a diagnosis, you're in a vacuum. You're put out the door and left there. Doctors and nurses have their unions, carers have their groups, but there wasn't a single [user] group for people with dementia. I thought: 'This is all wrong.'"

One year after he was denied access, McKillop attended the carers' conference as a guest and official speaker. In the intervening 12 months, he had recruited a raft of like-minded people with dementia and helped set up the campaigning group, the Scottish Dementia Working Group (SDWG). Alongside the 60 or so people with dementia who signed up, he has managed to secure a voice for people diagnosed with dementia in the corridors of Scottish power.

Fuelled by a righteous anger, the group has written to "anyone we could think of", McKillop says. When he found out that for early diagnosis of Alzheimer's, the UK "was propping up the bottom" of European league tables, he set about telling medical professionals and politicians that it was "unacceptable".

The group vigorously lobbied politicians and ministers in both the Scottish executive and Westminster and insisted on being consulted on dementia policy. It travelled the UK and Europe giving talks to medical professionals, telling them to rethink what living with a diagnosis of dementia means, and calling for improvements in the way people with a diagnosis are cared for. It has regular meetings with the Scottish minister for public health, Shona Robinson, and is represented on policy body, the Scottish Dementia Forum. Members also sit on the national council of Alzheimer Scotland, which part-funds SDWG and provides it with premises.

McKillop insists that the perception that someone with dementia "must be old, in the later stages and not able to take care of themselves" needs to be challenged - and if that means being pushy, so be it. "There are very low expectations of people with dementia," he says. "They don't think you can do things. Why do people fear us getting together? What did they think we would do?"

He says that while recent movies such as The Savages, in which a brother and sister come to terms with their father's diagnosis, and Away from Her, for which the actor Julie Christie has been Oscar-nominated for her portrayal of someone with dementia, are keeping the disease in the headlines, they tend to focus on the later stages of the illness.

McKillop stresses that SDWG exists to remind people that late-stage is "only one part of the story". He says that while dementia has been climbing up the political agenda because of projected increases in people being diagnosed in an ageing population, there is still a gulf of understanding between them and the people who make decisions about their lives.

Edward McLaughlin, an early recruit to SDWG, says people with dementia have been left little choice but to shout about it. "In my case, I want to bite arses and open eyes," he says. "They will not listen to polite conversation. They will not listen to you just trying to exchange ideas with them. You've probably got to shock them. Even the medical professionals are in the dark ages on dementia. They have preconceived ideas."

At a meeting in Glasgow, members of the group explain why banging on doors and turning up at otherwise restricted conferences matters. "[Medical professionals] are in a mental rut and this is what we are trying to change," McLaughlin explains. "We try to get ourselves invited to all the conferences and tell them about reality."

Campaigns are based on issues raised by SDWG members. Carers and supporters can attend meetings and have their say, McKillop says, but he has made it a prerequisite that it is people with a diagnosis who retain control and determine strategy. Another longstanding member, Agnes Houston, says the group is vital because it sheds light on some of the most difficult aspects of receiving a diagnosis, such as stigma and lack of understanding from doctors. But it is also important, she says, because it does so by championing the rights and abilities of people with dementia.

"You go into a hospital and they think they know better," Houston says. "I think we're trying to reach out and educate everyone, and to say that dementia is not the end. When you get the diagnosis, it doesn't mean you have to crawl into the corner and die."

But not everything is about being angry and protesting, she adds. Having a sense of humour has proved to be a key plank in the group's strategy. It helps break down barriers if people are unsure of how to behave around someone with dementia, according to Houston. That is why some in the group are currently working on a dementia joke book.

A few weeks ago, McKillop gave a talk to a group of student nurses at Stirling University. According to Philip Bryers, national coordinator at Alzheimer Scotland for SDWG, it was the latest example of the effectiveness of the group's "bolshie" approach. Feedback from the students was effusive.

"It demonstrates the impact it has when someone with dementia speaks to a group of professionals from personal experience," Bryers says. "On lots of occasions, people have told us that hearing someone talking from experience is better than dozens of lectures from people who know the textbooks but don't have the experience."

Bryers says things have been changing in the last few years and that, by pushing so hard, the group is now being invited to all kinds of conferences. "I think that Alzheimer Scotland would not now put on a conference without having somewhere in the programme someone with a diagnosis of dementia. There has been a big change. If anything, we are suffering from overload. There are too many invitations cope with."

The group is proving so popular that a separate arm catering for the north-east of Scotland, and taking in the cities of Dundee and Aberdeen, has been established. The goal, Bryers says, is to cultivate groups across the country that can campaign on issues both locally and nationally.

Dot Weaks, the only nurse consultant for dementia in Scotland, wrote her PhD thesis on why early diagnosis can change lives, and she has become an active supporter of SDWG. Appointed in October last year by NHS Tayside and now a professional adviser to SDWG, she says the group is unique. "They are real campaigners. They make themselves heard. They have managed to get the ear of government, and that is a very powerful place to be. They are there at the centre of things with politicians and professionals."

Unlike other service user movements, such as those for people with mental health problems or for carers, Weaks says, dementia has been lagging behind, but that SDWG is helping to change that. "People ask me what I think of their campaigning," she says. "I say I run in to the campaigns with them."

Daphne Wallace, chief executive of the Alzheimer's Society, says SDWG is a welcome addition to a dementia service user voice that is blossoming across the UK. Wallace, a psychiatrist who has been diagnosed with vascular dementia, puts the trend down to improvements in early diagnosis. More people being diagnosed early means more are able to become advocates, she says. "It's been assumed that people with dementia can't advocate," Wallace says. "Thanks to earlier diagnosis, people with dementia are being taken seriously." And the fact that a number of people with a diagnosis are being consulted for health minister Ivan Lewis's national dementia strategy is, she suggests, a sign of the times.

Recently, SDWG secured a three-year funding grant from Comic Relief that was matched by Alzheimer Scotland. It gives SDWG, McKillop says, a chance to "broaden out" the groups it advocates for. He is keen to work with organisations dealing with Down's syndrome, for example, to advise on how best to advocate for those who develop dementia.

Around the table in Glasgow, the group members agree that in the half decade since it was established, much progress has been made. Bryers says they are "extremely pleased" that government in Westminster and in Edinburgh appear to be acknowledging the scale of the challenge facing the whole of the UK in years to come, and they welcome the fact that dementia has been made a national policy priority in Scotland.

McKillop and the campaigners at SDWG see their job as making sure this does not automatically translate into thousands more people being regarded as on the scrapheap. With early diagnosis and the right treatment, McKillop says, many people such as him lead productive, happy lives for a considerable time. When it comes down to it, people with dementia want to be treated properly and taken seriously. "That's all we want," he says. "To be treated as human beings."

· Alzheimer Scotland is at alzscot.org; the Alzheimer's Society is at alzheimers.org.uk