rpssuk  the real picture of social services in the UK

Blowing the whistle on abuse

Whistleblowing – speaking out about wrongdoing in the workplace – can help support regulations to safeguard care service users, particularly vulnerable adults. Care staff play an important role in reporting abuse, says the Ann Craft Trust. Director Deborah Kitson looks at how managers can create an environment where whistleblowing is positively encouraged.

In response to the Public Interest Disclosure Act 1998, most employers have developed whistleblowing policies to enable workers to raise concerns. However, little is known about how whistleblowing legislation interacts with adult protection procedures, nor whether it is succeeding in protecting staff and the people with learning disabilities they work with.

Blowing the whistle can help protect adults with learning disabilities from abuse but doing so can have a profound impact on the whistleblower and on wider relationships within a care setting.

An Ann Craft Trust research study makes a number of recommendations about implementing an effective whistleblowing policy, supporting staff who blow the whistle and building a positive and open culture.

Changes in organisational culture are often necessary so that workers can speak out without fear of reprisal and feel confident that their concerns will be listened to. Whistleblowing policies need to make whistleblowers fully aware of the potential effects of when a concern becomes ‘formal’. Explicit detail is needed on what the process will entail and what support, safeguards and feedback whistleblowers can expect once they have spoken out.

The policy needs to cross-reference to adult protection policies and to the Public Interest Disclosure Act 1998, and should include a clear statement of the circumstances under which it is acceptable to share confidential information in order to report abuse. A clear distinction needs to be made between whistleblowing, complaints and grievances, and alternative procedures offered for the latter two categories.

Workers need information on sources of advice and support before reporting their concerns, particularly if they are not comfortable with discussing these concerns with their line manager, or have already done so but received no satisfactory response.

Managers and other people who receive whistleblowing reports need to have knowledge of the Public Interest Disclosure Act 1998 to ensure that a worker who has blown the whistle in good faith does not suffer detrimental treatment.

Whistleblowing needs to become integrated into wider philosophies of good practice and codes of conduct in care. Poor practice must be challenged and addressed before becoming entrenched and escalating into more severe forms of abuse. Managers and senior staff play a key role in fostering an open culture that encourages everyone to question and discuss care practices through regular supervision and team meetings.

Social care workers have an ethical and professional duty to speak out about abuse and poor practice in the workplace and, under current legislation, employers have a duty to support and protect staff when they raise genuine concerns.

The Ann Craft Trust study confirmed that whistleblowing is a vital part of protecting vulnerable adults but it continues to be an emotive and difficult issue. Implementing policies and procedures is only part of the solution. Safe services can only be developed where the organisational climate is such that workers can speak out without fear of reprisal and where they have the confidence that their concerns will be listened to.

The Ann Craft Trust aims to safeguard vulnerable people. In 2005 it published the research report Blowing the whistle on abuse of adults with learning disabilities, looking at the importance of whistleblowing in social care settings. Find out more at www.anncrafttrust.org

For advice on compliance with safeguarding regulations, visit the Independent Safeguarding Authority’s website at www.isa-gov.org

One of the most insidious characteristics of verbal or emotional abuse is that it can be very hard to recognise. The abuser may be very confident that he or she is behaving properly, while the person being abused may have such low self esteem that he or she perceives the abuser's behaviour as being deserved or, at any rate, nothing out of the ordinary. The longer abuse continues, the more pronounced these effects become, as the abuser's confidence grows and the victim's self esteem dwindles. This page aims to describe specific types of verbal and emotional abuse in order to make abusive behaviour easier to recognise. It also describes specific aspects of abuse that may appear in the therapy setting, and, in contrast, sets out the behaviour and conduct that a client has a right to expect from his or her therapist.

Adapted from The Verbally Abusive Relationship
by Patricia Evans

Emotional abuse has much in common with verbal abuse in that it is an attempt to hurt, attack or control the victim. The emotional abuser often uses verbal abuse to hurt the victim, but can use other means as well. Some of these are described below.

Adapted from Emotional Blackmail
by Susan Forward and Donna Frazier 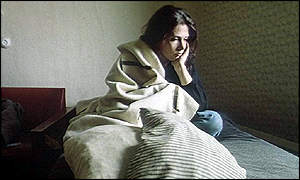 Women are at risk of abuse on psychiatric wards, claims a BBC survey

A half of women who have been in psychiatric wards claim they have been sexually abused there, according to a BBC survey.

One woman claimed to have been raped.

The survey, for BBC Bristol's Close Up West programme, is said to be the most extensive look at the issue from a patient's point of view.

Health reporter Matthew Hill sent out 404 questionnaires to women in the region who had been through the psychiatric system.

Twenty-one per cent of respondents said they had been abused by staff and 40% by patients.

The survey brings into question the issue of whether mentally ill women should have separate areas in psychiatric wards.

In the last few years, many of the old mental asylums have been closed down and patients put in smaller, purpose-built units which are thought to be less intimidating and more comfortable.

Some hospitals continue to put women psychiatric patients on mixed wards, but a few have women-only units.

Many now have separate sleeping and wash areas for women, but the sexes still tend to mix in hospital activities and at meal times.

One 17-year-old woman, Laura, threw scalding water in the face of a man she said was sexually harassing her.

She was on a mixed ward where the average age of patients was 45.

She spent four months in a prison medical wing after the incident with the water, but has since been moved back into a psychiatric unit, once again on a mixed ward.

Only two hospitals in the South West region have written policies on patient abuse.

Managers claim abuse is not a major problem. Some doctors say it is unhelpful to put women in women-only units.

Dr Simon Britten, a consultant psychiatrist, said: "They have to overcome their fear and anxiety about normal society. It is unnatural to provide for every single patinent the environment they want."

Mental health charities say the real picture could be much worse than the survey suggests.

They say many women are not believed because of their mental illness.

Earle Kessler, of Mind in the South West, said children who claimed to have been abused had not been believed for years.

"To take the attitude that these women cannot be believed because they are mentally distressed is an appalling thing to be doing," he said.

Jane says she was on a ward where women had a separate bedroom and washroom area, but they shared their living space with men.

She claimed the ward was "a hormone jungle" and says she was stalked by one male patient.

One symptom of her illness was that she had a lack of sexual inhibitions and she says this made her easy prey for some of the men.

She asked her GP if she could be moved to a woman-only unit, but the doctor said it was not possible, given the layout of the hospital.

Architect Neil McDougal says it may not be expensive to ensure women patients are safe.

He says it is just a question of adding more doors to psychiatric units, creating a distinction between female and general areas.

However, this would not protect them from staff who abuse patients.

In the next month, the government is to unveil detailed plans of how it is to overhaul mental health care.

The issue of phasing out mixed sex wards is likely to feature in its plans, but it is unlikely there will be a recommendation for women-only units.

Mind, which has done a big campaign against mixed psychiatric wards, says women are often too frightened to report abuse and worried they will not be taken seriously.

It wants hospitals to make it easier to report abuse, for example, by employing trained women key workers to deal with abuse complaints.

The Prevention of Professional Abuse Network says of the people who rang its helpline to say they had been abused, 70% were mental health patients.